What am I talking about? These are major food allergens. Sesame has now been added to this list.

While there are over 160 known food allergens, only eight (and now nine) have been considered “major allergens” that are required to be on listed food labels. These major allergens are responsible for about 90% of all food allergy reactions. The Big 8 are: fish (bass, flounder, and cod), shellfish (crab, lobster and shrimp), tree nuts (almonds, walnuts and pecans), peanuts, milk, eggs, wheat, and soy. There are 15 million Americans with food allergies. 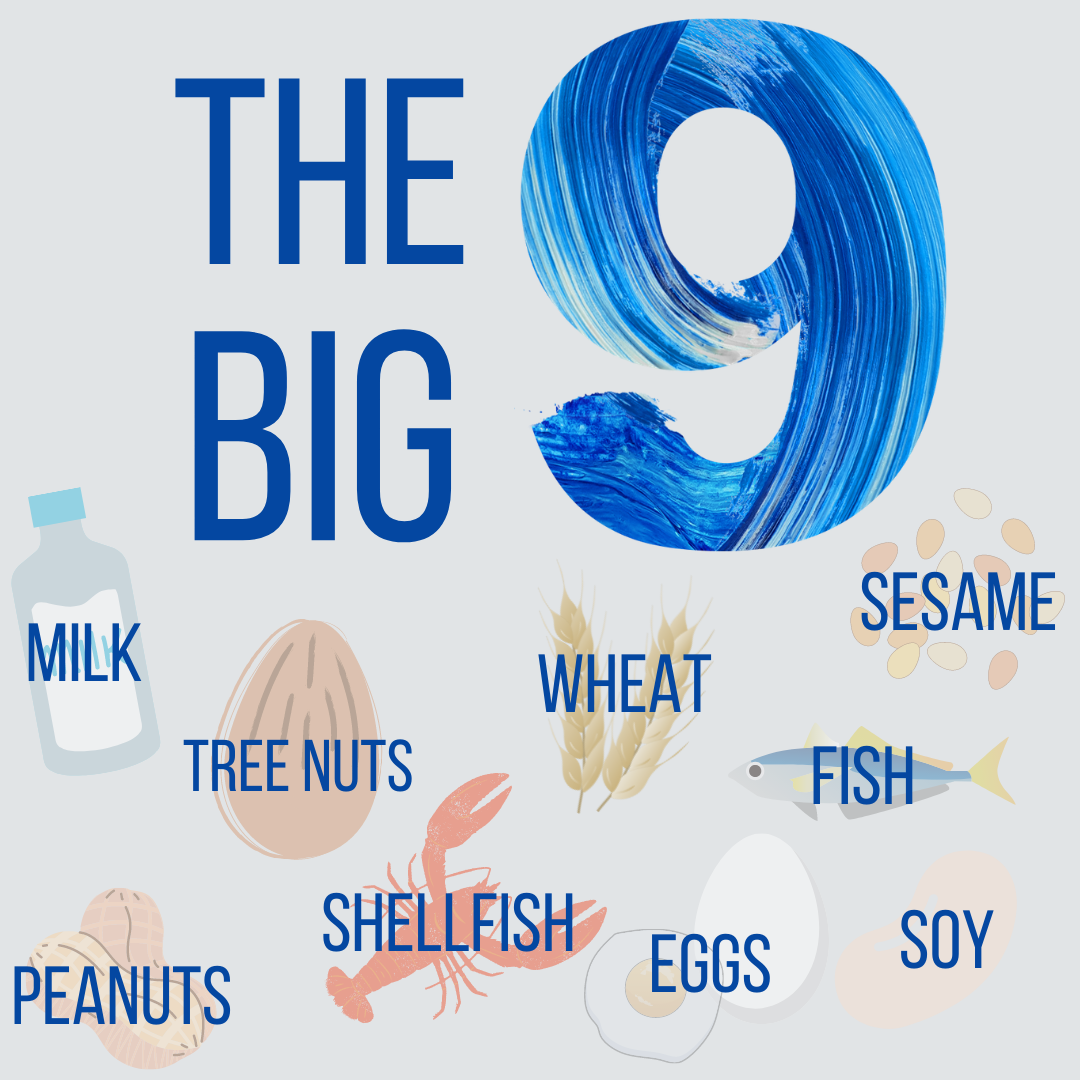 Sesame is the first “new” allergen added to the Food Allergen Labeling and Consumer Protection Act since 2006. If sesame is in a food product, it must be identified on food labels by January 2023. This is good news to the over 1.1 million Americans who are allergic to sesame. It’s interesting that package labeling of sesame has previously been required in Canada and Europe but not the United States, until now.

According to an article in Food Safety News, currently food labels may contain terms such as “natural flavors” or “natural spices” when sesame is used in a food product. These terms may allow someone allergic to sesame to accidentally eat something that could cause an allergic reaction and possibly kill them. Food companies will no longer be allowed to use these terms when referring to sesame. Sesame will need to be listed specifically. Some of the major food companies already list sesame, but others will need to change and update their label before the 2023 deadline.

Until this new regulation goes completely into effect, people who are allergic to sesame will need to continue to carefully read packaging and look for ingredients such as tahini, sesamol (an antioxidant), furikake, and gomasio (sesame salt). Sesame is a common ingredient in Asian and Middle Eastern cuisines in foods such as falafel and hummus. It can also be found in chips, cereals, snack bars and rices.

To help Americans avoid the health risks posed by food allergens, the Food and Drug Administration (FDA) enforces the Food Allergen Labeling and Consumer Protection Act of 2004. This act requires that the food label clearly state if there are any of the food allergens in the food.

Failure of companies to include required information about allergies on food labels is a violation of federal law. Undeclared allergens are a frequent reason that foods are recalled by the FDA and the United States Department of Agriculture (USDA).

Symptoms of a food allergy can range from a tingling in the mouth, swelling of lips, tongue and throat, difficulty breathing, hives, vomiting, abdominal cramps, diarrhea and loss of consciousness, to death. 150 to 250 Americans die each year from food allergy reactions.

On a somewhat related note, the current edition of the Dietary Guidelines for Americans (2020-2025) has a section on allergies and infants. It states that there is no evidence that delaying introduction to allergy foods helps to prevent food allergies in children. They recommend that potentially allergenic foods (those on the Big 9 list) should be “introduced when other complementary foods are introduced to an infant’s diet” at about six months. They go on to say that “introducing peanut-containing foods in the first year reduces the risk that an infant will develop a food allergy to peanuts.” And introducing cow’s milk as a beverage should begin at 12 months or later. For infants that are at high risk for allergies, they recommend that caregivers check with the infant’s healthcare provider before feeding a child peanut-containing foods.

Presently, there is no cure for food allergies. The only way to avoid a reaction is to avoid the allergy-causing food.

Cheryle Syracuse wrote this article and more similar ones for the Family and Consumer Sciences Column in the Brunswick Beacon. Syracuse is an FCS team member and can be reached at N.C. Cooperative Extension, Brunswick County Center, 910-253-2610.