Find this article at:
go.ncsu.edu/readext?561602
— Written By Sam Marshall

Fresh turkey oak samples were taken to the Plant Disease and Insect Clinic on Friday, October 26th. Initially we believed these trees to be southern red oak (Quercus falcata); however, we were able to conclusively, though with some degree of difficulty, identify the trees as turkey oak (Quercus laevis). Though many oaks hybridize naturally, these two are especially difficult to tell apart from one another and are often misidentified.

We observed on the leaves of the turkey oaks some fungal leaf spots, however, it was determined that the fungal species present were secondary pathogens caused by abiotic conditions (i.e. weather and stress). 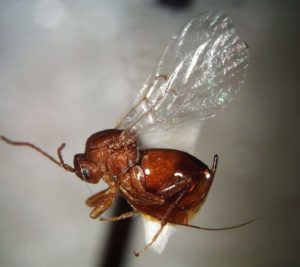 Cynipid gall wasps like the one seen here are common parasitoids of many tree species.

contained turkey oaks. I initially thought this might be a species of ambrosia beetle, but upon further inspection, we discovered that the holes were caused by a species of gall wasp from the family Cynipidae. Incredibly, we found some larvae and one adult in several branches, which confirmed our findings. This group of gall wasps has been reported in other studies and appear to be more prolific in years when trees are under stress, which includes drought, defoliation, increased land use, and urbanization. The ubiquitous nature of decline of the trees in St. James and on Long Beach Road indicate that trees have been stressed for quite some time.

Trees in urban areas appear to be affected by gall wasps more frequently, possibly because of increased surface area and adequate host material that would support populations of cynipid gall wasps for many generations. Conversely, cynipid gall wasp pressure tends to be lower in forested areas, possibly due to the generally smaller size of trees as a result of high vegetation density. As such, I believe that the extent of the damage may likely be confined to areas where abiotic stressors are greatest (i.e. urban areas). Dieback of the trees is likely a combination of disrupted vascular flow from the vast numbers of gall wasps found on the trees, fungal stress, and abiotic stressors.

So what to do? Right now, we will continue to observe and monitor while we await a response from our ornamental entomologist Steve Frank and whether an insecticide would be effective and/or practical. We do not think 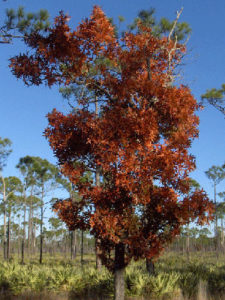 that the gall wasps are killing the trees per se (they typically do not), but years of repeated stress and insect pressure are slowly making the situation worse. The N.C. Cooperative Extension of Brunswick County office will keep an eye on the situation with the assistance residents of St. James, and we will follow up as soon as there is more information available.