Find this article at:
go.ncsu.edu/readext?490233
— Written By Mark Blevins 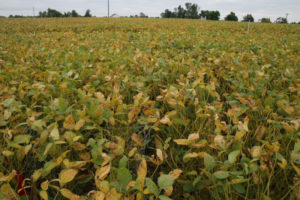 Asiatic Soybean Rust (ASR) has been confirmed closer to most of our NC soybeans this week, with detections in Jasper and Dillon counties, SC. Dillon County is just across the state line from Lumberton and Laurenburg, NC. Rust was detected on 2 out of 100 leaves, with one small cluster of pustules on each of the two leaves.

We recommend spraying a fungicide to prevent infection of ASR on soybeans if ASR is confirmed on soybeans within 100 miles of your field, and the soybeans are between first bloom and stage R5 (early seed development). By the time soybeans reach stage R6 (full sized beans in a pod on one of the top four nodes), they will typically lose all their leaves normally before rust detected now has time to defoliate them earlier, so rust no longer has the potential to cause economic damage.

The current status of rust in the continental US can be found anytime at https://soybean.ipmpipe.org/soybeanrust/.